Easter Sunday is not far off, and our church typically has a baptism during our annual Easter festivities. This day when we celebrate the resurrection of Christ is a wonderful time for a person to be baptized. “Why is that?” someone might ask. “What is baptism all about anyway?” Baptism certainly seems to be a very important practice. After all, it’s something Jesus specifically instructed us to do:

Jesus came and told his disciples, “I have been given all authority in heaven and earth. Therefore, go and make disciples of all the nations, baptizing them in the name of the Father and the Son and the Holy Spirit. Teach these new disciples to obey all the commands I have given you. And be sure of this: I am with you always, even to the end of the age.”

So we know we should be baptized out of obedience to Christ. But what exactly is baptism? There are many questions associated with this practice, so let’s see if we can clear up some of the confusion.

Historical background
Though baptism is referred to many times in the New Testament, it isn’t really defined or explained in Scripture. The people back then didn’t need an explanation; it was a common practice. Every first century Jew understood its meaning, so it would be helpful for us to learn how they understood baptism.

The Greek word translated “baptize” can mean to wash, dip, immerse or dye (as in dyeing clothing). We find evidence in various ancient religions of this practice, and it seemed to include the same primary meaning regardless of the specific religious context. It was always a public declaration that a person was converting to a new faith. The Jews were very familiar with this ritual washing. To them, it was a public sign that a Gentile was converting to the Jewish faith.

If we understand what this action meant to the Jews of Jesus’ day, we get a better sense of how shocking the ministry of John the Baptist was. He called the people to “be baptized to show that they had repented of their sins and turned to God to be forgiven [Mark 1:4].” What he was essentially requiring of them was to humble themselves just like a brand new convert, like a Gentile! They were publicly showing they were starting all over again with God, in the same way as someone just beginning in the Jewish faith. 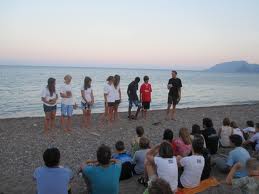 In Acts 2, we see the gospel of the resurrected Christ powerfully declared for the first time. The words of Peter pierced the hearts of the people, and they asked him and the other apostles, “What should we do?” The answer was they were to repent and be baptized in the name of Jesus Christ. This was a clear challenge for the people; they were to publicly demonstrate to all that they were placing their faith in Christ and committing themselves to follow him.

The people in the first century understood the deep significance of this action. And it still holds this important meaning for us today as well. Baptism is a way for us to publicly show everyone—our family, friends, community, church, even God—that we are placing our trust in Jesus Christ and committing our lives to him.

How are we to be baptized?
How should a person be baptized? Should we dunk, pour or sprinkle? The Greek word for baptize often means to immerse, but it can also mean to wash, dye, dip or flood. We tend to use the word somewhat technically, to refer to a specific religious practice, but the word wasn’t always used this way in biblical times. Sometimes it was even used just for washing one’s hands (Luke 11:38; Mark 7:3-4).

As we’ll see, there is striking imagery in Scripture that seems to best fit immersion. But there are some other descriptive passages that fit with other forms of baptism. For instance, in Titus 3:5-6, we read:

He washed away our sins, giving us new birth and new life through the Holy Spirit. He generously poured out the Spirit upon us through Jesus Christ our Savior.

This passage seems to support the pouring of water over a person (just as the Holy Spirit is “poured out”), and there are other passages that have similar readings. But then, Hebrews 10:22 says:

For our guilty consciences have been sprinkled with Christ’s blood to make us clean, and our bodies have been washed with pure water.

Verses such as this seem to indicate sprinkling.

Those who insist on baptism by immersion will often point to the account of Philip and the Ethiopian eunuch in Acts 8:38-39, where the text specifies that they “went down into the water,” and then after baptizing “came up out of the water.” Similarly, John 3:23 clarifies that John was baptizing in a certain location “because there was plenty of water there.” These kinds of details might cause us to lean toward immersion, but they are by no means unambiguous.

It’s hard to find justification in the Scriptures for us to be dogmatic about any one form of baptism. A very early Christian writing, the Didache, taught that immersion was the normal, standard form of baptism, but that—if sufficient water was not available—pouring water over a person’s head was fine too. This seems to be a healthy approach, respectfully drawing as much as we can from Scripture without slavishly demanding one (and only one) method.

The passage that many of us find particularly compelling in pointing to immersion is Romans 6:3-4:

Or have you forgotten that when we were joined with Christ Jesus in baptism, we joined him in his death? For we died and were buried with Christ by baptism. And just as Christ was raised from the dead by the glorious power of the Father, now we also may live new lives.

Being buried in baptism does seem to fit best with immersion. The whole immersion process beautifully illustrates this passage. As we step into the baptismal pool and declare our faith in Christ, we relinquish our old life (thus dying). Being lowered under the water is very reminiscent of being lowered under the ground in burial. And then being raised back upright fits perfectly with being raised to live a new life, as this passage in Romans describes.

But the specific method of baptism should not be our main focus. It’s not even the physical act of baptism itself that is most significant. We need to remember this:

The physical act of baptism illustrates a spiritual reality.

We are baptized out of obedience to Christ, and to publicly declare to everyone our faith in him. In baptism, we demonstrate that our allegiance has changed, our citizenship has been transferred. We now belong to the Kingdom of God. The physical act of being baptized in water illustrates how we have been baptized in the Holy Spirit, thus making us one with Christ and one with his body, the church. The physical water washing over our body illustrates the spiritual reality that we have been washed by the Spirit of God, cleansed of our sin.

As the passage above from Romans shows us, in baptism we identify our old lives as dead and buried with Christ, and our new lives as being lived through the power of Christ’s resurrection. These spiritual truths are the profound meaning revealed in the physical act of baptism. And this direct connection of baptism with the death, burial and resurrection of Christ is why Easter is a perfect time for a Christian to be baptized.

[We’ve looked at what baptism is, how it’s done and what it means. So who should be baptized? We’ll explore this question next week.]

What is baptism? [see above]

Who should be baptized?

Do we have to be baptized to be saved?