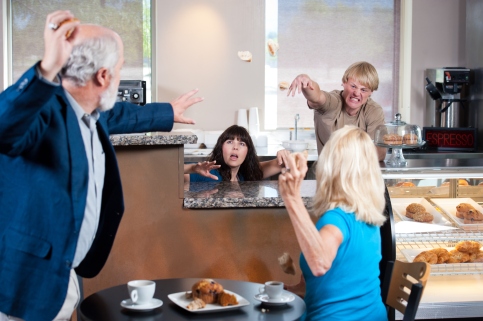 As I write this, believers in the US are preparing for the Thanksgiving holiday. Because this often means spending time with family members we only see once or twice a year, and because our nation is horribly divided right now, many of us are also resolving to avoid the whole subject of politics. Sometimes discretion is the better part of valor, after all, and it’s probably wise to be cautious about introducing topics that could violently explode an otherwise pleasant family visit. So we’re dusting off the old etiquette about never talking about politics or religion (at least the politics part). Fair enough.

But what about in our local churches? If your church is anything like ours, you live out your church life with people who have very differing political convictions. And because of the frequent intensity of these convictions lately—and the ensuing political discussions—many have essentially adopted a “holiday” approach when spending time with church family, and avoid any mention of political issues. This is undoubtedly better than open hostilities! But is it really the best way for us to handle our current politico-cultural mess? When followers of Christ gather should we just “not go there”?

Now let me quickly clarify there are some kinds of political talk I think should be eliminated in the church—permanently:

It’s not the place of pastors or leaders to tell the people in the church a specific candidate they should vote for or which propositions they should support. The church shouldn’t be handing out voters’ guides, or inviting representatives from only one party to address the congregation.

I’m also not suggesting we turn the application of any (sometimes every) Scripture text into a political rant.  If a passage we’re studying clearly addresses something that touches on politics, then we should have the courage to address what Scripture does. We don’t want to be guilty of skipping biblical principles in order to not offend political sensibilities. But we shouldn’t be looking for opportunities to interject our own political viewpoints.

We need to put an end to snide comments about the other side (whatever that is). We shouldn’t be tossing out partisan comments in a way that assumes everyone here shares the same views (which is rarely the case), especially when we’re mocking the intelligence, patriotism or even faith of those who disagree. We should always assume someone from “the other side” is present—because they usually are.

Some time ago, as our team was getting everything ready for our church service, two of our team-members were out front talking loudly about a recent controversy that was all over the news. Not only was their conversation strongly partisan, they were discussing an issue that directly involved race. I don’t believe either person is at all racist, but their vehement rejection of opposing views could easily have been misinterpreted. At the time this happened, people could approach our church’s front door from different directions and remain unseen until they were right around the corner. In other words, visitors could have heard our people talking long before our people would have seen them. Thankfully, I overheard what was going on from inside, rushed out and put a stop to the conversation. As I explained to them, if I was coming to visit the church and was one of these people they were talking about, I would have felt very unwelcome. I would have turned around, left, and would never have come back. Our guys were appropriately chagrined and agreed never to do this again.

So is the answer to just not talk about politics with our church families? Is that the best we can do? Let me ask the question another way: Are we no more capable of discussing volatile political issues than anyone else in our nation? Where can we have a healthy discussion about controversial subjects? If there’s anyone who could have a thoughtful, fair-minded, mutually respectful, loving but substantive, even pointed discussion about controversial political issues—without simply parroting partisan talking points—shouldn’t it be the church? Shouldn’t we be the ones modeling another way? When we spend time together as brothers and sisters we’re supposed to be helping each other grow and mature spiritually, encouraging one another to more faithfully live out our lives in a Christlike way. Are we supposed to do this in every area of our lives except for how we engage politically with society? Does this make any sense? It’s definitely easier, and avoids unpleasant tension. But are we to avoid quarreling by just not talking about difficult issues?

It’s easy for me to fall into groupthink when the only political interaction I have is with my echo chamber (and there are echo chambers on both the left and the right). If I’m beginning to advocate political views that are incompatible with kingdom principles, I need brothers and sisters to hold me accountable and tell me, “Curt, I don’t think that way of thinking fits with the character of Jesus.” We need iron to sharpen iron, especially where the outside culture is most divided. These are the issues we most need to discuss with fellow Christians. Not that we’ll always come to perfect agreement. But at the end of a frank discussion of our differing political views, we should still be able to embrace each other as brothers and sisters in Christ. And we need to realize that we should be more in harmony with our fellow believers on core values and principles (even if we disagree on methods and strategies) than we are with either/any of society’s political parties.

We need to be showing the world around us the love Christ has given us for each other, and we especially need to be modeling this love where we have the strongest disagreements. We need to show them that Christians don’t have to avoid any subject (which is often the best the world can do) because the Spirit has equipped and empowered us to be able to discuss anything and do it lovingly, respectfully and peacefully. And we should show them that through this kind of thoughtful interaction—where we’re seeking the truth, not trying to win arguments—we grow in our understanding of issues and help each other reach truly biblically-informed, spiritually faithful viewpoints that are in harmony with the kingdom principles of our King.

So . . . how well are we living out the fruit of the Spirit in our political engagement?

Are we behaving like everyone else, or are we showing them another way?