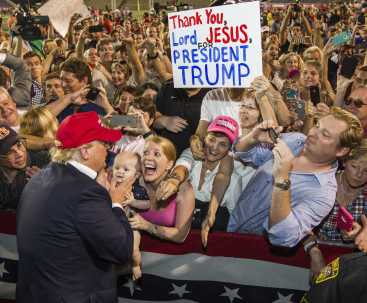 “Just because we are neutral, however, does not mean we are indifferent.”

He describes the absolute rulership of Christ, and the implications for his followers:

“The lordship of Christ places constraints on the way his followers involve themselves, or entangle themselves, with earthly rulers.”

Crouch reminds us of the danger of being so involved in worldly rulers that it becomes idolatrous.

The editorial then briefly reviews the problems with the two major party candidates, beginning with Clinton and then continuing with Trump. Crouch observes that, while criticism of Clinton is very common among evangelical Christians, many have not “shown the same critical judgment when it comes to the Republican nominee.” He lists again some of the obvious red flags regarding his character (which I’ve briefly described here, here, and here), and then concludes of Trump:

“He is, in short, the very embodiment of what the Bible calls a fool.”

Crouch notes that most Christians who support Trump are doing so “with reluctant strategic calculation.” This strategic calculation is focused on the appointment of Supreme Court justices and the impact on vital constitutional issues such as the sanctity of life and marriage, and religious freedom. Crouch then returns to the danger of idolatry in our current situation. This key point is so crucial, I’m going to quote the entire paragraph. I would encourage all of us—especially evangelical supporters of Trump—to consider this carefully:

“But there is a point at which strategy becomes its own form of idolatry—an attempt to manipulate the levers of history in favor of the causes we support. Strategy becomes idolatry, for ancient Israel and for us today, when we make alliances with those who seem to offer strength—the chariots of Egypt, the vassal kings of Rome—at the expense of our dependence on God who judges all nations, and in defiance of God’s manifest concern for the stranger, the widow, the orphan, and the oppressed. Strategy becomes idolatry when we betray our deepest values in pursuit of earthly influence. And because such strategy requires capitulating to idols and princes and denying the true God, it ultimately always fails.”

A question I have repeatedly asked is: Does God need Donald Trump? By insisting that we must vote for Trump for the sake of the unborn children (and to preserve religious liberty), are we not implying that—at this time—Donald Trump is necessary, that he is needed? Are we claiming that unless we vote for this morally vile candidate, there is no hope for the children or the church? What does this say about our trust in God?

Are we claiming that unless we vote for this morally vile candidate,
there is no hope for the children or the church?

What does this say about our trust in God?

Here’s the view of the editors of Christianity Today:

“Enthusiasm for a candidate like Trump gives our neighbors ample reason to doubt that we believe Jesus is Lord. They see that some of us are so self-interested, and so self-protective, that we will ally ourselves with someone who violates all that is sacred to us—in hope, almost certainly a vain hope given his mendacity and record of betrayal, that his rule will save us.”

Please notice the wording in that last sentence. If voting for Trump is imperative for evangelical Christians, then we are putting our trust in his rule. Such trust is tragically misplaced. And as these editors, I, and many others have warned, this will have devastating consequences to our witness to the world. (Anyone paying attention to social media will see that it already is.)

Many readers will be familiar with the concept of a “single-issue voter.” These aren’t people who are concerned with only one issue, but those who view one issue as of paramount importance. This  hasn’t meant they’ll vote for just anyone who expresses support for their key issue, but they refuse to consider someone who doesn’t share their viewpoint. Not supporting their position on this single issue is seen as a deal-breaker, distinguishing candidates they can support from those they cannot. For many evangelical voters, this single issue has been the sanctity of life and opposition to legalized abortion.

I’m proposing a new single issue. I say we shouldn’t even consider supporting a candidate who doesn’t have a basic personal decency, who isn’t an essentially moral, trustworthy person. Bad character should be automatically disqualifying regardless of the positions the candidate claims to support. If a candidate seriously lacks good character, their claimed positions are worthless. Treating the claims of dishonorable, unprincipled people as if they are worthy of serious consideration—even defending them!—lends credibility to unscrupulous people and makes us co-conspirators in their duplicity. I say if a candidate is someone who even the world widely views as a person of poor character, then we should not even consider such a candidate as worthy of evangelical support . . . . . . unless we are more trusting in the American political system to protect us and bring about societal change than we are the power of God.

In times of trouble, Israel often looked to earthly powers for help rather than relying on God—and God judged them for it. Christians have also misplaced their trust in worldly rulers before, whether it was the early church putting their trust in Constantine or German churches putting their trust in Hitler in the 1930s. We need to be very clear about our Christian priorities, and with whom we can and cannot ally ourselves. As Peter Berger once wrote: “He who sups with the devil had better have a long spoon.” Or as Scripture itself makes so clear:

Don’t team up with those who are unbelievers.
How can righteousness be a partner with wickedness?
How can light live with darkness?

Are God’s people trying to advance the light by partnering with darkness? May it never be!

Some trust in chariots and some in horses,
but we trust in the name of the LORD our God.
They are brought to their knees and fall,
but we rise up and stand firm.