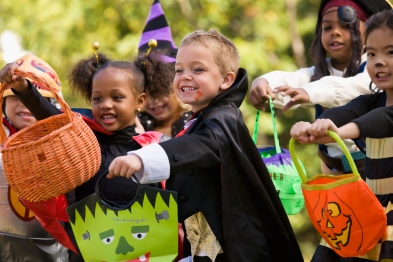 So, we’ve seen that the history of Halloween is not as neat as we might have thought, and that we can’t blame all the macabre elements of Halloween on the pagans. But, as Christians living here and now, how do we deal with Halloween? Let’s look at some biblical principles and how they might relate to this issue.

In the world, but not of it

Jesus said that he wants us to be in the world, but not of the world (John 17:14-15). Some Christians avoid Halloween because they say it has pagan origins. But (assuming this is true) to consistently live out this standard, we must also get rid of most of our Christmas traditions (which have pagan origins). We would need to stop using most of the names of the months, and stop referring to our English names of the days of the week, etc. We definitely couldn’t worship on “Sunday” because of its pagan origins. The problem in trying to follow this approach is that God intentionally put us into this fallen, pagan world, and we shouldn’t seek to remove ourselves from it. We are to be in this world without being of this world. And working out the balance of this requires wisdom.

In the 1st century church, some Christians were concerned about meat that had been “sacrificed” to idols. (Meat was routinely presented to idols and supposedly blessed by the god or goddess.) Some felt this meat was now unacceptable because it had been tainted by pagan association. In  passages such as 1 Corinthians 8 and 10, Paul shows that this pagan blessing by some “god” was meaningless, that there was nothing inherently wrong with the meat, and nothing wrong with Christians eating the meat. But, he added, they should be sensitive to Christians who had a weaker conscience in this matter and not encourage them to sin by doing something they believed to be wrong. This shows us that an alleged pagan association is not a solid reason, by itself, to avoid something.

In Romans 14, Paul addresses disputable issues that are a matter of personal conscience, and also the liberty we are to give each other regarding these issues. In the Bible, there are some things believers are clearly instructed to do and other things that Christians are unambiguously instructed not to do. But, for many issues we have no clear, scriptural guidelines. How we handle these matters is between each of us and God—and we are to respect the freedom God has given his people in these areas.

Establishing rules beyond what Scripture establishes is called legalism. Legalism isn’t wrong just because it’s harsh or unpleasant. Legalism is fatal to Christianity because it changes the gospel into something else, and because it becomes idolatrous—giving ourselves authority that only God rightly possesses. Should Christians celebrate Halloween? This isn’t a yes or no question. It is not an issue we can decide for our brothers and sisters.

Let’s clear up a common misunderstanding. Some people quote 1 Thessalonians 5:22 (from the King James Version) that we are to “abstain from all appearance of evil” and say this means we must avoid anything that even appears evil. But this isn’t what the text is saying. We’re to stay clear of everything that is genuinely evil. Christians disagree whether some things are evil. Some feel that television and dancing are inherently evil; some do not. Some feel reading Harry Potter books is evil; some do not. This is why these kinds of issues are called “disputable matters.” 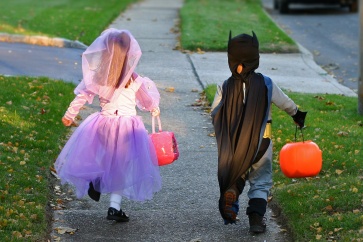 Some Christians can’t understand why a believer would celebrate anything on October 31. Others think it’s fine for kids to enjoy alternative church parties, but not to trick-or-treat. Other Christians feel it’s okay for their kids to trick-or-treat dressed up as cowboys or princesses, but not as witches or ghosts. Others point out that ghosts and vampires are no more real than fairy princesses, and their kids’ witch costumes have more in common with The Wizard of Oz than they do real witches. For centuries Christians have disagreed about whether we should fear and shun the darkness, or laugh at it and have fun at its expense. As with other matters of personal conscience, we don’t have the authority to establish one official Christian approach to Halloween.

I’ve known many Christian families who have taken different approaches to Halloween. But I’ve never met anyone who was drawn away from the Christian life because they went trick-or-treating as a child (even those who dressed up in scary costumes). I’ve talked to many people involved with witchcraft; I’ve never heard of a Christian child being attracted to witchcraft because of a Halloween costume or party.

However I have known many people who were raised in a religious culture of overly oppressive rules and regulations, who ran from their faith as soon as they could. For many, they weren’t offended by the Bible’s moral teachings per se, but the way Scripture was twisted and taken out of context to support the extreme ideas of certain groups, churches or families. Yes, some people reject the authority of God and his Word. This is true. But what is tragic is that many whose hearts are soft to God become confused and estranged from the church because of modern day Pharisees who take on authority that belongs to God alone and seek to define for all Christians what is acceptable and unacceptable.

What kind of spirits?

Many people become obsessed with the spooks and spirits associated with Halloween. But what about us? What kind of spirit do we have? Do we have a condemning spirit?

After Jesus’ baptism, he spent 40 days and 40 nights fasting, praying and resisting the temptation of the devil. That must have been an incredibly spiritual experience. What’s the next thing he did? He went to a wedding celebration (John 2:1-12). And when the guests had drunk all the wine, he provided more for them by turning water into wine. Was Jesus looking for things to condemn? Or was he seeking opportunities to bless?

How about us? Are we obsessed with seeing Satan and demons behind every corner? Or are we busy looking for how God is at work, revealing his love and truth even in surprising ways? Are we looking for evil, or for what is good? Is our first instinct to condemn . . . or to bless? Are we looking for reasons to reject people and activities . . . or reasons to participate (unless we simply can’t with a good conscience)? Do we accept everyone and everything, unless we cannot as Christians? Or do we reject everything and everyone, except what Scripture says we must accept? Which approach is more like Jesus, and which is more like the Pharisees?

Halloween is the one time of year strangers willingly visit our homes. 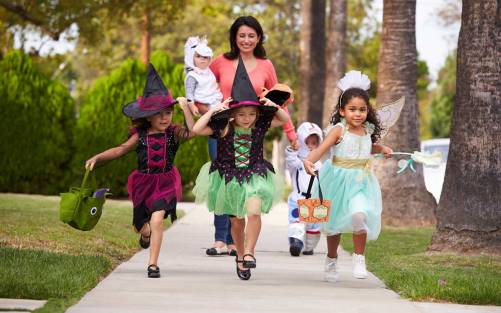 What kind of reception do they receive from Christians?

So should I (or my kids) celebrate Halloween?

By now, you hopefully understand why I can’t answer this question for you. And neither can anyone else. We are to be in the world, but not of it. And, for a great many questions, we each have to work out the wisdom and balance of this for ourselves and our children. I hope these posts help you make an informed decision (rather than a superstitious or merely traditional one). It’s fine for us to discuss these things and even compare how we approach various issues. But the answer to how you should approach these disputable issues is between you and God alone.