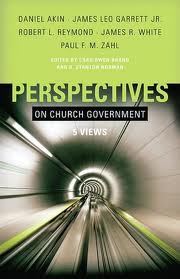 If you want to have a deeper understanding of the different views on church leadership, this book will be very useful. Each chapter is written by an author who holds a distinctive view, and then his presentation is critiqued by the other four contributors. We get to listen in on the discussion and hear some of the strengths and weaknesses of each viewpoint. If each author had been given the opportunity to respond to his critics the book might have been even more effective, but it includes insightful interaction as it stands. The editors also provide a solid introduction to the issues with an excellent historical survey. (I did think the lack of biographical material for each contributor was a curious oversight.)

Some may question why there are three chapters presenting varieties of congregationalism. I think this reflects recent debate over the nature of congregationalism. What exactly is it? Does it simply refer to autonomous churches who answer to no formal authority beyond the local church? Or does it necessarily include the idea of democratic involvement by the whole congregation? And how much involvement is required to be truly congregational? Meeting monthly to vote on everything? An annual affirmation of the church leadership? People who identify themselves as congregationalists strongly disagree on these issues, and some would not view all three of the “congregational” chapters as authentically congregational. The editors seem to have taken a broad view of ‘congregational’ in their descriptions of these viewpoints.

The single-elder-led church
Daniel Akin is first up, supposedly presenting the view that the church is led by a single elder. Akin doesn’t seem at all committed to this view, and doesn’t spend much time defending it. He prefers a plural-elder-plus-senior-pastor model. He devotes most of his chapter to defending his view of congregationalism. Arriving at his conclusions requires a considerable stretch for each passage he uses. I remain unconvinced that the New Testament clearly teaches the traditional, Baptist form of congregationalism. Akin writes in a very affable style. He doesn’t view the New Testament as being definitive regarding a specific model of pastoral leadership, which allows him to show appreciation for varying polities. He approvingly quotes Adrian Rogers’ claim that, “Anything without a head is dead; anything with several heads is a freak.” But just who is supposed to be the head of the body of Christ? Shouldn’t that be . . . Christ? Interestingly, his fellow congregationalist, James Garrett, criticizes Akin’s reliance on the possible existence of multiple house churches per city in the early church and his finding of senior pastors in Ephesians 4:11. Akin bases much of his view on the priesthood of all believers and seems disappointed that others do not tie their polities to this concept as well.

The presbytery-led church
Next, Robert Reymond presents the Presbyterian model of church government. This chapter is direct and well-presented. But, when it comes to the distinctive aspects of the Presbyterian system, Reymond has to stretch even farther than Akin in trying to find his view unambiguously taught in Scripture. In his response, James White rightly criticizes Reymond for basing his exegetical arguments on inference and supposition. Akin notes, “one searches the New Testament in vain for the ‘graded courts’ of local ‘session,’ regional ‘presbytery,’ and ‘general assembly’ Dr. Reymond so confidently asserts is there.”

The bishop-led church
Paul Zahl explores the Episcopal model of church government. Zahl is a delightful writer, and this chapter is a pleasure to read. Unfortunately, he includes no scriptural defense of his chosen leadership model. Zahl feels that Scripture does not give us a definitive, normative model of church government, and he seems to be happy with any and all views. This attitude is also reflected in his responses, where he approves of Akin’s acceptance of multiple approaches as valid, but strongly opposes Reymond and White who argue that the Bible has given us a clear, unambiguous church leadership model we must follow. In his response, White effectively demonstrates that the synonymous nature of episkopos (bishop/overseer) and presbyteros (elder) in the New Testament makes the Episcopal model biblically untenable.

The plural-elder-led church
Lastly, James White presents the plural-elder congregational model. He begins with some grand, overarching themes that may be off-putting to some. But his intent is to build a solid case, from the foundation up, that Christ has provided everything for his church, including ordering how it is to be led. He gives a clear explanation of the autonomous nature of the church, and what this does—and  doesn’t—mean. His chapter includes a good biblical defense of the independence of congregations and a sound presentation of scriptural teaching regarding church elders. White also explores some issues related to applying these biblical principles, and gives us some helpful insights. Unfortunately, he seems to accept using a title of “pastor” for one primary teaching elder in distinction to the other elders (although he makes clear this is not a separate role or office). Akin takes advantage of White’s apparent fudging on this, and notes this doesn’t sound that different from his senior pastor model. (Akin also wrongly accuses White of holding the teaching elder/ruling elder differentiation.) In his response, Garrett finds it too difficult to believe that four centuries of Baptists could be wrong in their views of church leadership.

I thought the chapters written by Paul Zahl and Daniel Akin were the most enjoyable to read, yet also the most disappointing because neither really tried to biblically defend their view. I was surprised by the amount of inference and conjecture relied upon to somehow find a clear Presbyterian or congregational (i.e. democratic) model in Scripture passages that simply do not clearly teach such. In my opinion, White’s chapter and responses contained the most sound exegesis and thus were the most convincing and compelling. Overall, the book was incredibly helpful. It left me wanting to hear much more of this discussion, which I think is an indication of a well-executed book.